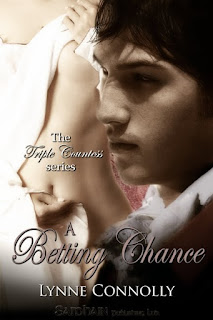 Sapphira Vardon needs five thousand pounds to avoid a cruel marriage and a grim future, and there’s only one path for her. Don a mask and an assumed name, and risk everything to win at the gaming tables. First, though, she has to get through the door. Luckily she knows just whose name to drop.

Corin, Lord Elston, is curious to find out who used his name to gain entrance to Mother Brown’s whorehouse and gaming hell. The enigmatic woman who calls herself Lydia isn’t the sort of female usually found here. Behind her mask and heavy makeup, she’s obviously a respectable woman—who plays a devilish hand of cards.

Sapphira is desperate to keep her identity a secret, but Lord Elston’s devastating kisses and touches demand complete surrender. And once he learns the truth, there’s more at stake than guineas. Corin finds himself falling hard for a woman who’s poised to run. A woman who’s about to learn that he only plays to win…

A Betting Chance
In this game of hearts, winner takes all!
ISBN: 978-1-60504-973-1
From Samhain Publishing
http://www.mybookstoreandmore.com/betting-chance-p-5238.html