Liquid Crystal at a special price! 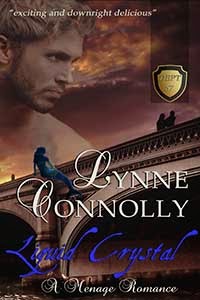 My holiday gift to you! Liquid Crystal at the lowest price Amazon allows me to go.
From now until the end of December, you can get Liquid Crystal at the special price of 99 cents! After that it will go up to $3.99, it's regular price.
http://amzn.com/B00H1ZC4BU is the Amazon link.
ibookstore is here: http://goo.gl/72BCXd

A Department 57 story.
When Crystal share the same bed with Bryn and Kai, the passion they wake in each other is as incredible as it is inevitable.
An unseen, unsuspected enemy rises up to threaten Crystal’s life, until mermen Bryn and Kai, rescue her from a nearly fatal plunge into the Thames. When Bryn and Kai show Crys the secrets of underwater loving, the passion they release steams up the water.
But their enemy still chases them, and now Crys, Bryn and Kai are in mortal danger. Even in a city as busy and modern as London, England, old enemies lurk and old secrets hide.

If you would like to read an extract, either go to the Amazon Look Inside feature, or go here: http://lynneconnolly.com/LiquidCrystal.html

Go on - treat yourself! 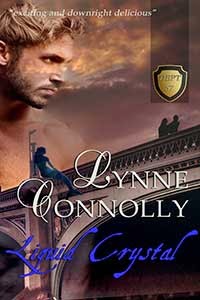 Liquid Crystal is finally out! It’s the story of two mermen and their lucky lady. If you want to know how merpeople make love underwater, look no further!
Anyway, it’s here:
Kindle
Barnes and Noble

And you can read an excerpt here:
http://lynneconnolly.com/LiquidCrystal.html

One of the delays was in the cover art. In the original, something went wrong. The hero’s head was supposed to fade into the scene, but in the event, his nipple reappeared right on the parapet of the bridge! Since it was a similar colour to the bridge, nobody noticed it until last week. So I saved it from appearing in dozens of Cover Fail blogs!

And the other outlets are slowly rolling out. It’s on special offer for December, at 99 cents, so you could save yourself a bundle if you pick it up now!

So, other news. I’ve signed a new contract, for four brand new historicals, but not under the Lynne Connolly name! So it’s hush-hush and very exciting, but since it’s all new, I can’t really say too much more, and I probably shouldn’t be telling you that much. I’ve spent all the last few months working for this new project.

Plus, something I can tell you about, and a cover reveal!
A new story, called Lightning Unbound, will be appearing at Samhain in spring next year. I’m more than thrilled about this one, it’s a project that is dear to my heart. I worked it through a few years ago, but when the rock star series and the Cougar Challenge series proved so popular over at Ellora’s Cave, I concentrated on those. The first book came very close to publication, but the publisher went bust, and I tucked the book away on my hard drive.
But I never forgot this one. It’s set in the mid-eighteenth century, and it has strong paranormal elements. Two of my interests are mythology and the way it feeds into the zeitgeist, and of course history. I blended the two where it seemed most appropriate. I can promise that the books will be as rigorously historically accurate as any of my historical romances. But the addition is the paranormal element. I promise there are no shape-shifters or vampires. I’ve taken a very different approach with this one. I’ll let you know more details nearer the time.
But here’s the cover. You like? 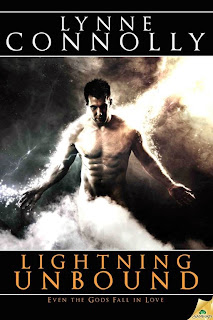 When designing this cover, the one thing we couldn’t find was a decent picture of people in accurate period dress which hasn’t been used over and over. The alternative was a lovely image of a lady, but I’ve seen that particular image used a lot recently, which is some indication of the lack of suitable images.

More news?
Next February has been marked for the release of “Dispossessed” at Loose-Id. I’ll tell you more about that next month, but it’s a spin-off series from Department 57. You don’t have to read the Department first, this is completely new!

Watch for another Dept 57 re-release in January. I’m so delighted that this series is refreshed, and will reach a whole new audience. There might even be new books!

So whatever you celebrate in December, have a really happy one. I’ll be on Twitter and Facebook, obsessing about my favourite programs, the writing life and music, and I’m preparing for my Trek Across The Pond next May for RT and other goodies!
Where to find Lynne Connolly and her Books
My website
The hub of everything I do. It's updated regularly, with excerpts, short stories and other goodies:
http://www.lynneconnolly.com

My newsletter and yahoo group.
Members get a monthly newsletter, where the news ALWAYS breaks first, and new excerpts are aired. There is also a free book, available in the Files.
To join, go here:
http://groups.yahoo.com/group/LynneConnolly/
or send an email here:
LynneConnolly-subscribe@yahoogroups.com

I currently write for Samhain Publishing, Ellora's Cave , Loose-Id , Total E-Bound and Carina Press. So you can find me on their loops and on their websites.

I write columns for Sybil at The Good, The Bad and The Unread:
http://tinyurl.com/6j42ut

And my email is lynneconnollyuk@yahoo.co.uk