I've worn my computer in by finishing a story. It's a story I just had to write when I started thinking about the heroine and her dilemma. She's an ex addict. Three years ago she went into rehab and came out clean, and she's been rebuilding her life ever since, but her past catches up with her. I loved writing it, but this month and next, it's back to the dragons and vampires!

I'm planning the story of Andros Zelinski, who some of you might know from the STORM series. He had a wasting disease, but that was cured when he was converted to a shape-shifting dragon, but I'm fascinated to find out what scars are left when that happens, and how you cope. I've been looking at real life cases of people who've had a debilitating illness or condition, and what happens after they recover. It's not all a bed of roses. Sometimes they have to relearn skills they haven't used since childhood and they have to grow accustomed to a whole new way of life. How much would that affect a man who thought he'd die early and slowly lose his faculties, only to find himself stronger and longer-lived than any man on earth?

"Maiden Lane" was accepted at Samhain. That's the next Richard and Rose book, so I'm really pleased about that. It should be out in early Spring next year. Now I have to write the last one.

I'm thinking about Freddy's story. I know a few things about the happy-go-lucky Freddy that have never emerged in the stories, so I might use those aspects to develop his story. I also want to do Antonia's story, from Alluring Secrets, but I doubt that Freddy and Antonia will make a match of it.

As always, if you want to know anything, if you review for a site and want review copies, or if you just want to chat, do get in touch. I love to hear from you! 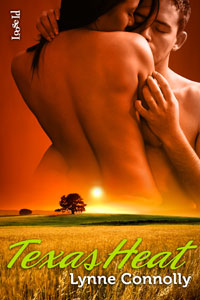 This month, "Texas Heat" is released at Loose-Id. I am incredibly excited about it, as it's my first full-length contemporary romance, and one that has been on my computer for some time. It's a story I've worked and reworked, one of the personal projects many writers have. But I thought it was time that more people met Annie and Vin, and luckily, LI liked it enough to accept it for publication.
Here's part of the first chapter. I do hope you like it.


Description:
Colliding with a gorgeous man in London’s National Gallery leads Annie to sharing days of steamy passion with him, closeted in her hotel room. Even when she discovers that Vin owns the company buying hers, she can’t get him out of her mind -- or her bed. Poor Vin is going blind. Can she deny him his last sight of a woman’s naked body?
Vin’s worries are piling up -- the company he’s buying has financial problems verging on the criminal, and he’s going blind after an operation that went wrong. There’s a slim chance he could see again, as slim as the prospect of having Annie, after he discovers that it’s her company with the problems. But he can’t stop wanting her. Can’t stop taking her to bed and claiming her as his own.
She denies criminal activity and he wants to believe, but all the evidence is against her. His instincts tell him Annie is innocent, so he takes a new complication in her life as a chance to keep her close -- and safe from the danger that threatens her.
But Annie won’t let him take control of her life. She wants to prove her innocence, even at the expense of the man who took everything she had to give, and came back for more.