This month in the UK, it's Bonfire Night. The night when pets are kept indoors and the world explodes with lights and glitter. Firework Night. It's a very British thing, to celebrate the night Guy Fawkes and his co-conspirators failed to blow up Parliament. The British Constitution is a wonderful thing, but would it have survived the destruction of the centre of government and so many ministers?
Probably.
It's those "what if?" questions that keep historical novelists writing. There are so many turning points in history, when the world could have moved in a different direction. I use some one in the Emperors of London, and another what if? motivated my writing the Even Gods Fall In Love series. I get the feeling that with the gods series, I've started a new genre! If the steampunk era was moved back a hundred years and linked with the classical world. I have absolutely no idea what to call it, though. Georgepunk? Classicpunk?

When I write contemporaries, I tend to move closer to what is happening. There are so many undercurrents in our complex world, sometimes it's just a matter of choosing one and getting on with it. When I came to write "Escaping the Past," for instance, I'd just watched a documentary about the Camora in Naples. Like the Mafia, but on the mainland. When I read about the counterfeit goods industry, and that some authorities assessed the potential profits as high as the profits from the opium industry, my mind started working.
Then I used my experience as a foreigner in a new country, and Jade Trent was born. "Escaping the Past" is part of the Sweet Sensations anthology out later this month, a 99 cent box set. I'm really excited about this book. It has a lot in common with "Learning to Trust," which came out a few years ago. It was originally meant as a sequel, but other projects got in the way. However, Jade and Gary wouldn't leave me, and now here they are, struggling out in the world.
Escaping the Past, part of Sweet Sensations is out on November 26th, and up for pre-order now!
http://www.amazon.com/Sweet-Sensations-collection-bestselling-authors-ebook/dp/B0170Z4BY8

So without further ado, allow me to introduce you to Gary and Jade. 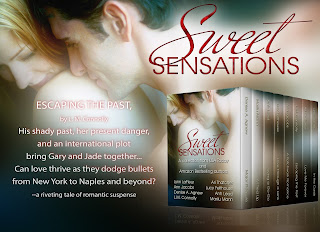 Jade Trent has come to New York to find work and to live incognito. Two years ago she received a message from her brother, Miles, the last she’d heard of him. Since Miles works for a shadowy organisation loosely connected to the Marines, she’s more than worried, but she obeys his request and leaves home. She found a new life, one she enjoys, even though she only has a job in a department store and lives modestly.


Gary has a shady past. Although he can claim a personal fortune, his father nearly bankrupted the family company, then he went back to his Italian roots and took strictly illegal work from his gangster family. Gary’s Neapolitan family still rule in Italy, and Gary has kept strictly away from them.

Jade and Gary have an instant connection, but the social gap between them is huge. When Jade is put in danger, Gary is forced to act to save her. Unfortunately, Jade’s brother is working undercover for Gary’s family, something both his family and the government agency watching them are aware of. Back in Italy, they’re faced with unpleasant choices. Jade won’t allow the danger she and Miles are in to lead Gary to follow in his father’s footsteps and rejoin the family business. Not that Gary has any such intention, even if it means he loses his life protecting the woman he loves.


Gary picked up the phone on the third ring. “Yes?”
He sat up straighter when a voice barked at him. A voice he hadn’t heard for a long time. “Gary Mazzini?”
“Yeah.”
The voice rattled off a string of numbers and letters. Automatically Gary kept count. The placement of the letters told the listener what to do with the numbers. They always came to seven.
He returned his ID number. He hadn’t needed the formality to recognize the voice of his old boss. “I’ve got a job for you,” Camstock said.
“It might have escaped your notice, but I don’t work for you anymore.”
“You still have the same relatives.”
Shit, yes, he did. Not people he cared to associate with. “Keeping my distance has kept me alive so far.” Gently, he closed the lid of his laptop, as if Camstock could see through the phone to the company figures laid out on the screen.
“So did working for us.”
“At one time.”
Camstock was playing him, reminding Gary what he owed the Extras. Organizations like the one he’d once belonged to had the most mundane names. This one was called Extras, because that was the way the expenses tended to appear on budgets.
Gary had done with the Extras and everything else from his previous life. Now he ran his own business, legitimate imports of mostly sports equipment, and he lived quietly. No way would Camstock drag him back in.
“How about a damsel in distress?” his old boss asked. “Or maybe a wicked woman?”
“You have active agents. Use one of them.”
“Nobody can do what you can. Hear me out, okay?”
“Sure.”
Where was the harm in that?
Which was why, instead of an evening watching the game on his widescreen TV, he hired a limo to take him to a shareholders’ shindig at the Central Park Hotel. Much against his will, but yeah, Camstock had a point. Nobody had his relatives or his experience in this field.
They were lucky.

You can read Gary and Jade's adventures later this month!
Escaping the Past, part of Sweet Sensations is out on November 26th, and up for pre-order now!
http://www.amazon.com/Sweet-Sensations-collection-bestselling-authors-ebook/dp/B0170Z4BY8

See you next month!
Lynne
Where to find Lynne Connolly and her Books
My website
The hub of everything I do. It's updated regularly, with excerpts, short stories and other goodies:
http://www.lynneconnolly.com
For the paranormal and contemporary romances, the website is here:
http://lmconnolly.lynneconnolly.com

My newsletter and yahoo group.
Members get a monthly newsletter, where the news ALWAYS breaks first, and new excerpts are aired. There is also a free book, available in the Files.
To join, go here:
http://groups.yahoo.com/group/LynneConnolly/
or send an email here:
LynneConnolly-subscribe@yahoogroups.com

I currently write for Kensington Publishing, Samhain Publishing, Loose-Id , Total E-Bound and Carina Press. So you can find me on their loops and on their websites.

I write columns for Sybil at The Good, The Bad and The Unread:
http://tinyurl.com/6j42ut

And my email is lynneconnollyuk@yahoo.co.uk