Out on the 1st December!

Get it from Amazon
From Barnes and Noble 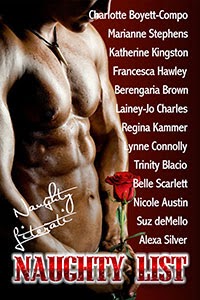 Be careful what you wish for. The NightWind hears every whisper, every sigh, every need and he's coming to grant your every wicked, wanton desire.

Frustrated with untrustworthy men, Melissa orders a man doll. When delivery guy, Nick, shows up, she has second thoughts about how to satisfy her needs.

PRELUDE TO A MOST UNUSUAL MARRIAGE
Katherine Kingston

Guilty secrets torment widowed Elizabeth Fitzhugh. A Christmas visit to the Earl of Chisenholm offers redemption, if she can find the courage to grasp it.

Librarian Abby Kelly comes west finding a roguish shapeshifter who desires her. Will Goldwolf is no gentleman, but Abby discovers he’s just what she wants.

The excitement has left Jewel, Donovan, and Oscar’s relationship. Jewel plans to spice things up, but will Donovan and Oscar rise to the challenge?


TUNE ME UP
Lainey-Jo Charles

Jason catches Dani having an intimate moment with a recording of him singing to her, and is ready to move them from friends to forever.


ON THE EIGHTEENTH OF JANUARY, ’78
OR, A NIGHT AT VALLEY FORGE
Regina Kammer

During the infamous winter of ‘77-‘78 at Valley Forge, two soldiers fanboy over their
charismatic leader, General George Washington.

Two gorgeous Italian hunks save art restorer Sandi when she accidentally summons an ancient evil from a mosaic. Their methods are unconventional—and scorching hot!

She only had one wish this Christmas. To find the one man who was strong enough
to master her in bed and out.

On board a deep space station Christmas Trent learns her sexy cyber lover,
who may not be human, wants to steal her for his own.

Sirena Petra wants one thing for Christmas—an orgasm. And sex toy expert Kenyon Fort has exactly what the lion shifter needs to find more than just her happy place.

Rock star Max is terminally ill. When Aislin falls into his life, rocking his world,
everything changes. Is she his Christmas miracle?


I had a wonderful November, mainly because I went to Florence, one of my favourite cities in the world. It’s small enough to walk around, and packed with the most breathtaking treasures you’ve ever seen in your life.
Because Florence doesn’t have the flash-bang-whizz of Rome, it’s easy to underestimate it, but this is a big mistake. It all started here, the hotbed of the Renaissances, the revolution of thinking that swept away the Middle Ages and ushered in a whole new world. It takes a day or two for the meanings to sink in, because the art isn’t in-your-face, but when it does, the implications are breathtaking.
So is the art. We had to go and see the David more than once, which we could do with our Florence museum card. Seeing the reproductions in no way prepares you for the actuality of the statue. It has an immense presence, consumes the space and everything around it, leaving the viewer breathless.
Oh yes, and I also found time to do some shopping. Florence is famous for embroidery, leatherwork and silk, so we splurged and bought Christmas presents, too.
Our hotel was right in the center, the Pitti Palace Hotel. Other than being a bit noisy, which personally I don’t mind, it was perfect. We took our own kettle so we could have tea in the room, and settled in for the week. If you get a chance, don’t pass it by.
There’s a picture of me going around the social networks, which was taken in the monastery of San Marco. 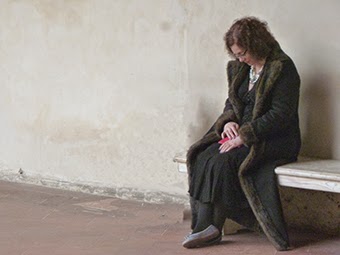 I did actually get time to write, and there is an excerpt from this month’s release, an anthology for the holiday season. The book is doing really well, and we’re all very proud of it.
Apart from that, I’m doing historicals. I can’t get enough of writing them, and fortunately, you’re buying them, which means I get to continue writing!
So a heartfelt thank you for that. Currently I’m trying to dictate my work, because I’ve had a flare-up of the arthritis, and it hurts like hell to type, but the speech-to-text is much slower, and really frustrating when it won’t do what I tell it to!
And the run-up to Christmas. We used to go insane, making sure everything was perfect, but now we take it easier, just ensuring everybody has a good time. It’s a time for families, and that’s really important. So here’s wishing all of you the best of holidays, and may we all make it into 2015 in one piece!
Posted by lynneconnolly No comments: