Temptation is a Kindle Daily Deal! 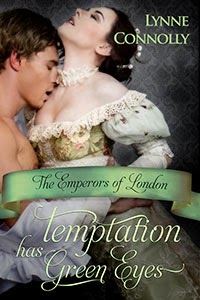 I'm thrilled to announce that Temptation Has Green Eyes has been selected by Kindle as a Big Daily Deal!
on the 8th May, it will be listed as a Daily Deal with a big discount, so if you haven't picked up a copy yet, now is a good time to do it!
Get your copy here!
Posted by lynneconnolly No comments:


Well, I’m on my annual pilgrimage to Texas! I’m sitting here looking out at a glorious Texas afternoon, the sun blazing down on the ranches and vineyards, fluffy clouds in the sky and it’s all good!
Next week, I’ll go to Dallas and look around a bit, before the RT Convention. I’m so excited about RT, but I am every year! If you’re near Dallas, or if you’re coming to RT, come and see me there! I’m at the Convention and the Round Up, and I’m there to chat!
Texas is so different to what I’m used to. The same but different. Slightly different terms, all those trucks and pickups on the roads, small farms and huge, huge ranches. And the bikers, of course, sporting lots of hair and a “What are you looking at?” attitude.
I’m in the German part of Texas, visiting places like Fredericksburg and Luchenbach. The bakeries are a sore temptation, of course!
But I’m still writing, and getting a little work done. This month I have another reprint to offer you, this time it’s the last Department 57 book, Diamonds of Ice. A male Sorcerer has to find his way in the world after he is deprived of his powers. He finds a vampire, but a very unusual one! “Diamonds of Ice” is set in the world of London advertising agencies, a world I used to work in several moons ago.
Look for the first in a new series, “Agents of CAT,” coming out soon. This is a brand new, never seen before book, and it’s a contemporary paranormal. I am so excited about this book, I can’t tell you! I’ll be able to show you the cover soon, but I’ve seen a preview and it’s fabulous!
The anniversary of the Battle of Waterloo is getting closer, and preparations for the two novellas from me to commemorate the event are inching nearer. Two very different sets of heroes and heroines are preparing for their entrance to your hearts. The first is a surgeon, and his lady is an assistant, the only one who can do her work without flinching. The second is about an officer called “Lucky” by his men and the Duke of Wellington, but the last thing he feels is lucky, and the wife he left behind when he went to battle. They barely know each other, and yet they are supposed to get together and make an heir. I love marriage of convenience stories!
Then the month after, sees the next Emperors of London historical romance. I am really pleased with the way this series is turning out, and with the readers’ enthusiasm for the series. Thank you from the bottom of my heart for helping to make this series a success!
I’ll be on Twitter and Facebook as much as I can during RT, so please keep in touch.
See you next month! 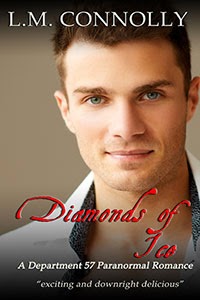 Read an Extract and Buy the Book
Amazon
Kobo
Barnes and Noble
Sorcerer Fabrice Germain lost his Talent when he was assaulted, but he still has his job. Relocating to London seems like the answer, and then he meets Gemma, who works for his rival. She’s a vampire. That’s two reasons to avoid her, but Fabrice and Gemma still end up scorching the sheets one Saturday night.
Then the world goes to hell. Fabrice ends a weekend of passion and tragedy as a converted Talent – a vampire now, like Gemma. One who has sworn to avenge two murders, and is back as an agent with Department 57. After that, he’s happy to die.
Except there’s Gemma. Fabrice really wants Gemma.
Gemma doesn’t want Fabrice to surrender to the blood phobia that threatens to take his life. She wants him for longer than a night–in fact she thinks she might never get enough of him. When they’ve caught the murderers, what is there to stop him starving to death? Only her.

Fabrice looked down at the screen of his cell phone. “It’s okay. Don’t worry. I’ll get a minicab.”
“It’s Friday night,” she pointed out. “You won’t find one for hours.”
He looked up. “You’re right, but I don’t want you to do anything you feel uncomfortable with. I can manage. I’ve enjoyed this evening. I don’t want to spoil it.”
“But?”
“But…” He breathed and, as if he couldn’t bear it any longer, shoved his phone in his pocket and took her in his arms. It felt good, so good—his hard body under the luxury fabrics surrounding her, male heat. Instinctively she lifted her face and met his eyes, still brilliant blue in the dim light. “I’m ready.”
They had to have a physical connection for her to flash them, she recalled, quelling her pang of disappointment at her first assumption that he wanted to kiss her. She entered his mind and saw the flat, small and crowded, a table under the window covered in books and a closed laptop, a cheap bookcase crammed with paperbacks and hardbacks, a rug in the center of a tiled floor, and a big bed covered with a plain cream throw. She concentrated on the rug and flashed.
They arrived in a flurry of movement, still clasped together. It would be polite to break apart at that point. But he didn’t let her go. Instead he drew her closer so her breasts crushed against the hard planes of his chest, and he brought his mouth down to hers.
A good-night kiss. Okay, she could do that.
It went on a bit longer than usual for a good-night kiss. A lot longer. She heard a thump as something soft hit the floor. Then his embrace tightened around her. Slowly he lifted his head. “We shouldn’t be doing this.”
“No, we shouldn’t.”
“You don’t sound sure.” When she said nothing, he continued. “I’m sure I want you, Gemma, but I don’t want you to regret anything. I won’t.”
“So we have to agree not to talk about work?”
“Honey, I don’t give a fuck about work. As far as I know, we’re only rivals on one account, and that’s over now. The decision’s up to the client.” He swallowed. “But whatever you decide about us, make it quick. Please. I’m dying here.”
She wriggled her hips provocatively against him, letting the delicious heaviness of his erection push against her stomach. Too much. “I can’t resist either.” This might get him out of her system so she could relegate him to a pleasant memory and get on with her life. Yeah. Sure it would.
Laughing, he swept her up and took the two steps to the large bed that dominated the room. As she landed on the mattress, bouncing, she laughed too. What a great way to finish a tough week.
He smiled and let himself fall on top of her, but caught most of his weight on his arms. He was in shirtsleeves, and she realized the gentle thump earlier must have been his leather jacket falling to the floor. He lowered his head to take her lips, but where she had expected passion, she received tenderness. He kissed her gently, his lips just caressing hers as though they had all the time in the world for just one kiss. She curled her arms up around his head, sliding her fingers into his hair, feeling the silky texture in the sensitive notches between her knuckles. Nothing had ever felt so fucking good before.
When she opened her mouth to him, he took his time, running his tongue around just inside her lips, exploring an area she never knew could feel so sensitive. He touched her, smoothing his hands up to rest under her arms, at the sides of her breasts, and where another man might have taken instant possession, he stroked gently. Then he entered her mouth with one deep penetration of his tongue, and she gasped, taken so high she felt the damp warmth between her thighs increase. She lifted her legs, running the sensitive inner surfaces along the fabric of his pants.
He finished the kiss and lifted, looking down at her. “Much as I like you in this top, it’s time for it to go.”
Her breath in her throat, she sat up just enough to let him grasp the hem of the silk and draw it over her head. The top prevented her from seeing his expression at her lightweight, lacy bra, but she heard his gasp and his low groan. When he cleared her head and cast her top aside, she brought her hands down to his shirt and began to unbutton it. Each revealed portion of tanned skin came as a new revelation, another step in their journey to paradise.
The scant hair on his chest was, like his brows, a midbrown, softly curling, softening the hard muscles set into relief by his pose, arms supporting his body so he didn’t squash her. Perversely she wondered what it would feel like to support his entire weight. It would feel wonderful, she just knew it.