Half way through the year! This has been a turning point year for me, when I’m stopping to take stock. What I see above everything else is the prevalence of the self-publishing phenomenon. I’ve even joined it myself, and I’m seriously considering taking all my historicals self-published. It’s a lot more work, but the rewards are great, both in money terms and in satisfaction.

This month I’ve revamped some of my titles. I’ve split Black Leather, White Lace into its original two novellas, and dropped the price of each one, to see how they do that way. So now Vernon's story is first, followed by Nathaniel's. TheHaunting of Belle Sauvage has a new cover, as has Irresistible You, and I’ve taken one Department 57 book indie, “Treasure Laid Bare,” one of the first ones I wrote. Department 57 has been rather a jewel in my crown, and I’d love to write some more, so depending how “Treasure Laid Bare” does, I can take the series independent. My lovely publishers, Loose-Id, have no objection, and I think they’re waiting to see how it does. I’ve sent them a trilogy that will form the first books in a spin-off series, so I’m waiting to see if they like it. But I might write them anyway! That’s the joy of having the self-publishing option. I can test the market, and see what the people who buy my books like to read, and I can offer the books at a lower price, since I only have myself to feed and clothe! Covers and editing are done as one-off fees. But I can’t see myself abandoning the publishers I’m active with right now.
You can get the Amazon version of the story here -
www.amazon.com/Treasure-Laid-Bare-Dept-ebook/dp/B00D71ZYQO/
Later on this month, I’ll publish the new Regency, which still doesn’t have a title! It’s about a widow who discovers she’s not a widow when her husband unexpectedly returns. He never knew he had a wife, either. Although he claims amnesia, he’s playing for time, because he knows he doesn’t have a wife. So why is the seemingly respectable Faith posing as his widow? He knows her from when she was the wife of one of the officers in his company (he was a soldier), and he’s wanted her for years, but honour has kept him away.
So, what do you think? “Coming Home To Love”? or “Whatever the Price”? This is proving really hard to title, and it’ll probably be the last thing. Some titles, like “Brutally Beautiful” just appear out of nowhere. I had the title before I started to write the book. Others are stubborn, and take some teasing out. 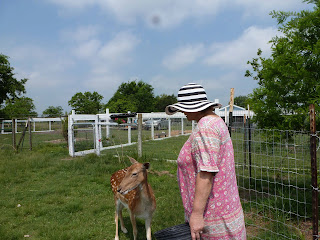 Last month, May, was amazing. I described my adventures at RT over on my blog and on “The Good, The Bad and The Unread,” but my American adventure was more than that. I finished off my time there by visiting one of my besties, writer Desiree Holt, who is having a wonderful time appearing on TV as “the granny who writes sexy books.” If you know Des, you’ll know there’s a lot more to her than that! Then I stayed with Kathryn Falk, at her ranch in Texas, which is a bit of Paradise. It feels that way, too, very tranquil, and wandering around feeding and playing with the animals is something I will never tire of. Kathryn has a pet deer who follows her everywhere, so I’ve included a photo of Kathryn and Bambi. 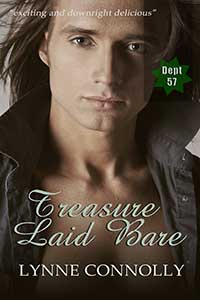 If Sorcerer Garon Rothwell has sex, he loses his powers--and also the rigid control he has over his life. But when he meets bookstore owner and ex-army intelligence officer Tara Carlisle, he desperately wants to give in to the passion she evokes in him. But he's stopped by his own fears and a woman four hundred years dead.

Tara wants Garon, too, but until they catch the evil stalking her little town, she can't give in to the desire she knows they both feel. The frustration is killing her...

But Erzsébet Báthory murdered over six hundred women the last time she walked the earth. Now Tara has inadvertently brought her back, and if they don't stop her, she might just beat that record.
Buy the book here
Posted by lynneconnolly 2 comments: