Here we are again, October, who’d have thunk it?

I had a new release recently, and there is other fun and games afoot! I’ve spent the month trying to catch up, and get myself organised, but I’m nowhere near that point yet. Maybe I should just accept that I live in a permanent state of confusion and get on with it.

In news, you might have heard that I’m no longer an Ellora’s Cave author. Writing for EC was a great adventure, but it’s over now. I’ve changed the way I write, and EC is heading in a direction that isn’t for me. I asked for all my rights back and received them. Already Pure Wildfire is back up, and I have plans to reissue the STORM and Nightstar series in due course, too.

I booked my place at RT 2015, too. How could I resist a convention in Las Vegas? It’s taking place at the Rio, the residence of the Chippendales, so that should be interesting! I’m taking side trips, to New Orleans and the Grand Canyon, so if anyone is around in April next year, then maybe we can meet up! 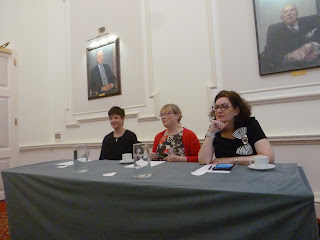 I went to London last week, and did a talk at the Royal Overseas League, with lovely Nicola Cornick and Imogen Howson, which went swimmingly. The photos are of me in action, so I’ll have to show you one of those. We talked about selling romances in the USA, what expectations are and what the experience is like (terrific!)

of course, while I was in London, I did do a bit of shopping and visit a few museums. They’re still there, we left them intact, but it’s like refilling the well, visiting these places. I also took the chance to do a trawl of Portobello Road Market, which I highly recommend if you find yourself in those parts. We didn’t get to the end, but we did pick up some bargains.

Writing? Well, I’m doing a pseudonym book right now, but then I’m starting to write the last in the current tranche of the Emperors of London series. Don’t worry, though, the publishing schedule is a way bit behind, so you have lots to come! The next release will be in December, so I’ll talk more about it then.

My other series, Even Gods Fall In Love is also coming on apace. I have just written another, and had one accepted. I can’t tell you how much fun this series is to write, though plotting can be a bit of a nightmare at times. I try to put lots of easter eggs there, so if you know your mythology, you can pick them up, and if you don’t, it really doesn’t matter, because the book is a solid, coherent story. The next release is War Chest, featuring Mars, who is also the Duke of Lyndhurst, and I think you’ll be surprised at his story!

Contemporary releases are quieter. That’s partly because of the pseudonym, but it’s also because I’ve been concentrating on the historicals. Paranormals don’t sell nearly as well as they used to, so I need to rethink what I’m doing there. At one point they were my best sellers, so it just goes to show how the market can change!

As always, I'd really, really appreciate your help getting the word out about my books. These days you have to shout a lot louder to get people to look, and I find it hard to shout that loudly!

This month I have a re-release of Strangers No More, now re-edited and republished by a new to me company. It’s been a delight, working with Evernight Publishing, and I’d love to do more of these stories! And it’s an Editor’s Pick!

Passion In The Dark

Buy from All Romance Ebooks - https://www.allromanceebooks.com/product-passioninthedark-1894040-149.html


Two people meet in the dark to have hot, sweaty, anonymous sex… But Whitney is increasingly drawn to her stranger. He’s powerful but gentle, and murmurs to her in Greek. But if he saw her face, it would all be over. Whitney’s looks make her unphotogenic. If she wants her promotion, she’s going to have to make some drastic changes. How will her stranger feel about that? He means more to her than he should.


Excerpt from Passion In The Dark

Later that night, Whitney slid her keycard into the slot of a hotel room door in downtown L.A., the kind of hotel that hosted conventions and business meetings. Anonymous and huge. The green light flashed and she pushed the door open.

Someone dragged her into the room and slammed her against a wall. The door clicked shut, blocking out the only light available. The room was in pitch darkness, the windows covered, the lights out. She hit the wall with a soft thud, her face against the paper.

Her attacker grabbed her around the waist, his free hand dragging her head back by her hair, and then his mouth crashed down on hers, taking her with a hot desperation that flung her into the whirlwind. Now she couldn’t think. Now she could only feel. His hips pressed against hers at an awkward angle but he twisted them against her and she felt the insistent bulge of his erection.

The moment his lips came into contact with hers, she knew him. Knew that pressure, the way his mouth felt against hers, the way he flicked her lips with his tongue in an unspoken request—demand—that she open for him.

When she didn’t obey immediately, he nipped her bottom lip and when she opened her mouth to protest, he surged in, soothing the bite with his tongue in a gentle caress before resuming his fierce attack on her. She tasted him, peppermint and a touch of something else, something fruity. He’d had a glass of wine recently. He never met her drunk, but he sometimes tasted of wine and sometimes brandy. She loved it. It added a tinge of danger, the threat that he might get carried away and ignore her needs. But he never did.

“Never” being three times. They said that three times and one was hooked. Three cigarettes, three shots of heroin, three “Stranger Danger” encounters. The man with no name gave her what she needed, what she craved. He fed her addiction and she fed his.

He took her mouth with an intensity she could respond to only with the kind of helpless acceptance she never demonstrated in her real life. The life outside this door. Whimpering, she followed him when he withdrew, begging for more. With a grunt, he turned her around so her back pressed against the hotel wallpaper. Her backbone rolled against the hard surface but she welcomed the discomfort. He wasn’t going to stop. He seemed as desperate as she was. That had connected them from the first time, and he was no less desperate now. He wanted her.

Here, in the dark. No excuses, no explanations needed here.


See you next month!