I'm going to do a bit of an Alan Bennett here (if you haven't heard his vicar from the Beyond the Fringe show, you've missed a treat!) And tell you a bit more about my origins.

My mother was a pattern-cutter, grader and sample machinist. She's still with us, thankfully, but doesn't do much sewing any more.

In years past, we'd go to Harrods and Harvey Nicks in the January sales, and I'd say "I want this, and this, and this..." We'd sketch it, go home and she'd make it.
She worked for a company that made legal knock-offs of designer clothes for upmarket department stores. She was sent to spend some time in the atelier of Yves St Laurent, and she adored him, because he could sit at a sewing machine and do what she could, which few designers were capable of.
After the haute couture sales, before pret-a-porter became the big event, the designers would select and sell some of their toiles (fabric mockups) to the big stores. Sometimes they'd sell the original garment, with a special licence to reproduce it. Then it was the job of my mother or someone like her to turn that toile into something that was commercially viable. Computers do a lot of that work these days. But back then it was all slide rule and lots, and lots of brown paper and tissue paper. My mother still has two pairs of shears she used back then. Every cutter had her own shears, and God protect anybody who decided to "borrow" them without permission!
Which is why, although we weren't rich, I had a wardrobe full of designer clothes. The cutters would take the garments apart, use them to develop the patterns, and then put them back together. But because of the licence from the designer, they weren't allowed to sell them on. So after a season, they'd have a sale for the workers. My chocolate-brown Dior suit with a pencil skirt and fitted jacket got me a few jobs on its own! (Some workers would take the clothes out of the factory piece by piece, but shhh, we don't want people to know that, do we?) - "Oh look, this dress has lost its central bodice piece, so we'd better throw the rest away." "I could do with a bit of fabric for dusters - can I have it?"

And now, the tenuous link. I never realised how similar we were until recently. Because I'm an idiot, no doubt. But I create books in the same way. I have an overall vision, a way I want the book to go, and then I have to pull it apart and put it back together again, to test it and make sure it works for my readers as well as myself.

Which is a long, convoluted way of saying I'm writing again. I've just sent in the second SSL book, and starting on the third. I'm really excited about this series. I've had a mock-up for the cover which looks amazing. So far it's been a quiet year for me, but starting next month, I have new books for you!

First will come the new series of contemporary romances from Tule. I was so excited to write these, I can't tell you. It was fabulous to get back to contemporaries. I'd love to do some more! And then, I'd really love to do some paranormals. Is everybody up for a few sexy vampires and shape-shifters? I have a new series ready to go, but I keep being told that "nobody wants paranormals" any more.

The other thing I did was to redesign my website. Same colours, but a few extra tweaks. Soemthing went wrong, and after I restored it, I thought I might as well do some work on it, so while I had a bit of time, I did just that.
Check it out! https://lynneconnolly.com

So here are the covers for the new series! Exclusive to you, though I'll go wide with it in a week or so.
For those of you who review, the first book is up on Netgalley for your delectation and delight. Since I've had some time away from fresh contemporary content, I'd really appreciate your help getting the word out. If these do well, I get to do some more! 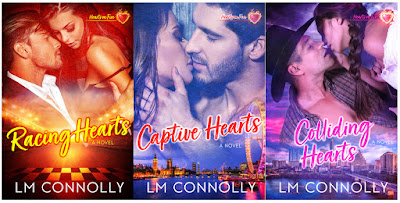 Gorgeous, right?
The first book is about a racing driver (her) and the owner of a big Italian car company based in Milan.

The second book is about the brother of the man in the first book, a hotel owner from New York. The heroine is the owner of a small hotel in London, a family business that has fallen on hard times. But he wants more than her hotel. He wants the owner as well!

The third book is about a wealthy property developer from Houston, Texas, and an artist from London who has snagged her first exhibition, thanks to her best friend, the hero's sister.

Fun and games ensue. These stories all have a close connection to me, closer than you might think! Cars and racing? Oh yes, love it, and I've always wanted to write a book set in that world. The second book? I stayed in a crazy little hotel once close to Oxford Street. The experience was well worth it, because I've now got a book out of it! The third book? Houston is a city I love. I have friends who live close by, and I've visited it often. Houston deserves wider recognition as a really exciting place to be.

So there you have it. And now I really have to get back to my writing! Got to keep the muse fed!
Posted by lynneconnolly

Email ThisBlogThis!Share to TwitterShare to FacebookShare to Pinterest
Labels: April is here, Hearts on Fire